Stroke is characterized by the rapidly developing loss of brain function due to disturbance in the blood. As a result, the affected area of the brain becomes inactive and eventually dies. Strokes can be classified into two major categories: AIS and hemorrhagic stroke. AIS is characterized by interruption of the blood supply by a blood clot (ischemia), while a hemorrhagic stroke results from rupture, or bleeding, of a blood vessel or an abnormal vascular structure. According to the U.S. Center for Disease Control and Prevention (“CDC”), about 87% of strokes are ischemic in nature with the remainder classified as hemorrhagic. According to the CDC, worldwide, stroke is an important cause of adult disability and the second leading cause of death in developed countries. Risk factors for stroke include advanced age, hypertension (high blood pressure), previous stroke or transient ischemic attack (“TIA”), diabetes, high cholesterol, cigarette smoking and atrial fibrillation. According to the World Health Organization, each year approximately 15 million people worldwide suffer a stroke, of which 5.5 million will die and 5.0 million will be permanently disabled. According to the CDC:

At the site of a blood flow blockage in the brain, there exist two major ischemic zones - the core ischemic zone with nearly complete loss of blood flow, and the surrounding ischemic penumbra having partially reduced blood flow. Within minutes, the significant lack of blood flow in the core (i.e. glucose and oxygen deprivation) rapidly depletes energy stores and triggers the loss of ion gradients, ultimately leading to neuronal cell death. The ischemic penumbra zone, however, may remain viable for several hours via collateral arteries that branch from the main occluded artery in the core zone. Unfortunately, the penumbra is at great risk of delayed tissue damage due to inflammation and cell death, or apoptosis. As time goes on, a lack of blood flow in the ischemic zone (infarct) leads to fluid buildup (edema) and swelling which creates intracranial pressure. This pressure on the brain leads to tissue compression resulting in additional ischemia. Additional events in AIS include vascular damage to the blood vessel lining or endothelium, loss of structural integrity of brain tissue and blood vessels, and inflammation. A stroke can lead to permanent damage with memory loss, speech problems, reading and comprehension difficulties, physical disabilities, and emotional/behavioral problems. The long-term costs of stroke are substantial, with many patients requiring extended hospitalization, extended physical therapy or rehabilitation, and/or long-term institutional or family care. However, provided the extended window of viability in the penumbra, next generation stroke therapies are being developed to protect valuable brain tissue during the hours to a week after a stroke. 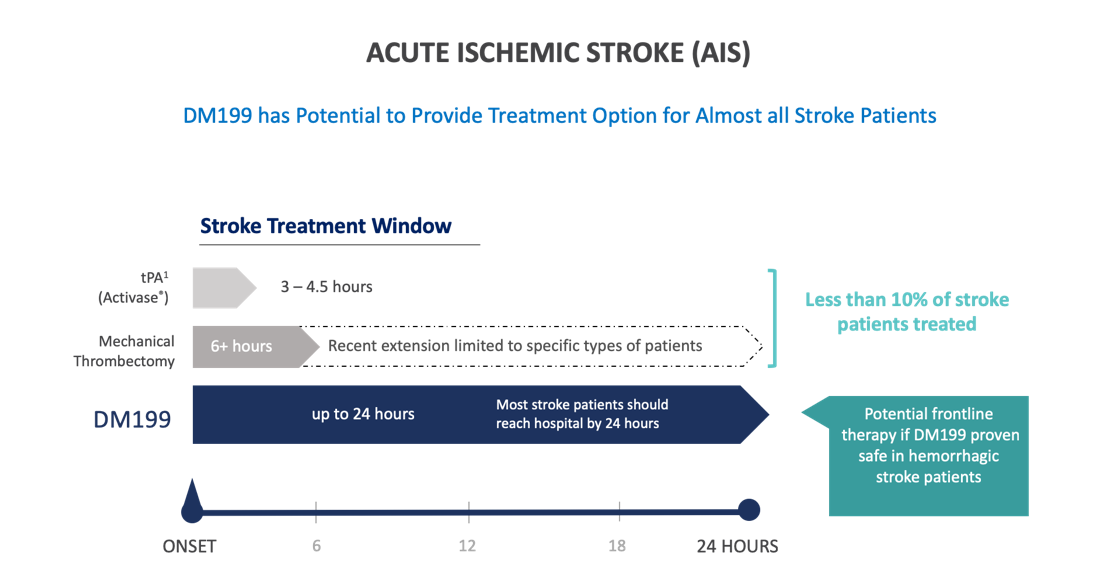 We believe that stroke represents an area of significant unmet medical need, and a KLK1 treatment (such as DM199) could provide a treatment option and a significant patient benefit with its proposed therapeutic window of up to 24 hours after the first sign of symptoms. Currently, the only pharmacological intervention for AIS is the use of tissue plasminogen activator (“tPA”), which must be given within 4.5 hours of symptom onset. Mechanical thrombectomy, in which the clot is removed using catheter- based tools, is also available to some patients. Despite the availability of these treatments, many patients are not eligible due to the location of the clot, the elapsed time after the stroke occurred, or safety considerations. Thus, we believe DM199 offers significant advantages over the current treatment options and fills an unmet need for patients who cannot receive tPA. Additionally, DM199 may also offer a complimentary follow-on treatment for patients who initially receive tPA or mechanical thrombectomy treatments. Based on the number of strokes each year (approximately 1.7 million in the U.S., Europe and Japan and 15 million worldwide) and the $8,500 estimated cost per patient for the current standard of care, tPA, we believe the annual market opportunity for DM199 could be significant.

KLK1 in China (marketed under the brand name Kailikang® by Shanghai Pharma/Techpool Biopharma) is widely used for the treatment of AIS, making therapy available to hundreds of thousands of patients who currently have no options. Kailikang® is a human urine-extracted KLK1 protein. We believe that the proprietary DM199 protein could result in an improved efficacy with optimized pharmacokinetics (drug level exposure) and avoid the side effects of risk of endotoxins, impurities and antibody formation in comparison to Kailikang® that is isolated from human urine. We also believe that DM199 addresses potential supply constraints that makes Kailikang® difficult and expensive to produce given the limited source of human urine. We believe these factors make the recombinant protein DM199 a product candidate that is better positioned for regulatory approval worldwide than a urine-derived protein since we believe it can meet the rigorous required manufacturing standards.

To learn more about this study or to see if you qualify, visit REMEDY Clinical Trial.