We are seeking to restore the body's natural ability to regulate blood flow and maintain vascular homeostasis by restoring levels of the protein known as tissue kallikrein (KLK1). KLK1 regulates a system thought to stimulate healthy levels of multiple important factors that increase blood flow and reduce inflammation, including nitric oxide, cGMP, prostaglandin, and cAMP. DM199 is being developed to treat several serious acute and chronic diseases.

In healthy individuals, KLK1 is believed to be responsible for producing the local signaling molecules nitric oxide and prostaglandins when and as they are needed. Nitric oxide and prostaglandin play a central role in regulation of many systems within the body. In fact, Nobel Prizes in Physiology and Medicine were awarded in 1982 and 1998 to scientists conducting pioneering research that uncovered the role of these signaling molecules.

DM199 is a recombinant form of human KLK1. KLK1 is a serine protease (protein) primarily produced in the pancreas, kidneys and salivary glands, which is the key protein in the kallikrein-kinin system (“KKS”) and plays a critical role in the regulation of local blood flow and vasodilation (the widening of blood vessels which decreases blood pressure) in the body, as well as an important role in mitigating inflammation and oxidative stress (an imbalance between potentially damaging reactive oxygen species, or free radicals, and antioxidants in your body). We believe DM199 has the potential to treat a variety of diseases where healthy function requires sufficient activity of KLK1. The primary focus for our DM199 program development is on chronic kidney disease (CKD), initially CKD caused by IgA Nephropathy and hypertension in African Americans, and acute ischemic stroke (AIS).

The following is DiaMedica’s proposed DM199 mechanism of action. 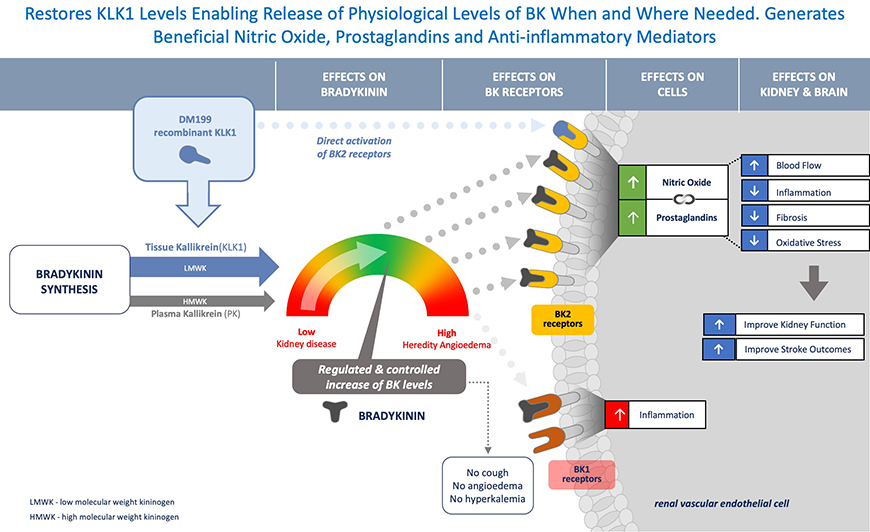 KLK1 is involved in multiple biochemical processes. The most well-characterized is its enzymatic cleavage, or separation, of low molecular weight kininogen (LMWK) to release active bradykinin (BK)-like peptides, collectively known as kinins, which activate BK receptors (primarily BK2 receptors) and trigger multiple physiological processes including the release of nitric oxide and prostaglandins. This sets in motion metabolic pathways that can improve blood flow, reduce or prevent inflammation and protect tissues and end-organs from damage. Scientific literature, including publications in Circulation Research, Immunopharmacology and Kidney International, suggest that lower endogenous, or naturally-created KLK1 levels in patients may be associated with diseases related to vascular disorders, such as kidney diseases, stroke and hypertension. DM199 therapy is intended to supplement naturally produced KLK1 to restore normal function of the KKS and facilitate the activation of the BK system that protects the kidney and brain from damage, maintain structural integrity and support normal functioning.

For CKD, restoring KLK1 is hypothesized to dilate both the afferent and efferent arterioles, potentially reducing intra-kidney pressure, improving micro vascularization and increasing blood flow. KLK1 also is anticipated to improve the kidney's ability to filter blood (glomerular function) by reducing inflammation, oxidative stress and fibrosis. KLK1 is also believed to play a significant role in regulating the epithelial sodium channels (EnAC), which are involved in the regulation of sodium levels in blood. 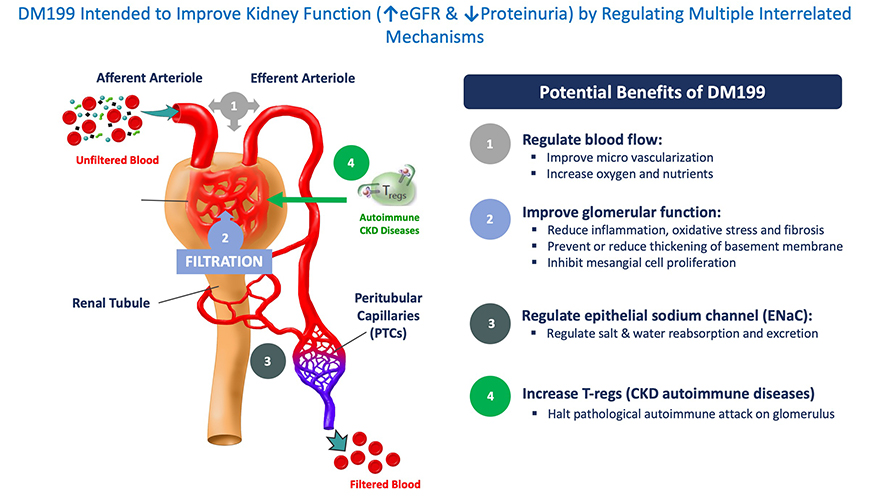 Deficient Levels of KLK1, Nitric Oxide and Prostaglandin is Broadly Linked to Disease

A wide range of cardiovascular, metabolic, inflammatory, fibrotic and neurological diseases may be associated with abnormally low levels of KLK1, nitric oxide and prostaglandins. Disease-associated reductions of KLK1, nitric oxide or prostaglandins may disrupt normal physiological function and contribute to reduced blood flow, inflammation and fibrosis.

We have developed a synthetic version of the KLK1 protein, referred to as a recombinant KLK1, to boost KLK1 levels in the body. This increase in KLK1 levels is intended to allow the body to preferentially increase nitric oxide and prostaglandin levels and release other anti-inflammatory mediators. Nitric oxide and prostaglandin are believed to act synergistically to boost production of cGMP and cAMP.

Our approach is to investigate the potential for DM199 to restore KLK1 levels as a novel, safe and effective therapeutic strategy for addressing multiple serious and rare diseases characterized by deficient KLK1.

KLK1 isolated from pig pancreas and human urine is believed to have treated millions of patients in Asia for multiple diseases. Beyond KLK1 use in Asia, several approved therapies also are based on nitric oxide-cGMP (nitric oxide-generating compounds, PDE5 inhibitors, and sGC stimulators) and prostaglandin-cAMP compounds (epoprostenol, treprostinil (PAH)). However, these treatments lack the natural regulation of KLK1/DM199 therapy.

We are investigating the potential for DM199 (recombinant KLK1) stimulation as an effective mechanism to restore the body’s natural function.